Hey McMaster History Students have a lecture series going on and Hamilton cancels polling station there.  Also council tries to save itself from its own mistakes for arts?

Oh and one more thing, its election time and I want everyone out there in Hamilton to vote! Hamilton seems to have a very inefficent government based on taxing/ bylaw enforcing working businesses and letting abandoned buildings collect tax breaks. Everyone seems to be waiting for some big saviour, whether its walmart or redhill expressway to turn things around. I think Small business/ ordinary people can do a better job!

I know some people think voting is a joke but even if it is it’s a cruel one, ever wonder why Hamilton downtown is so bad? No votes!

Why?  The main reason is he’s done more for the city in the last year then I have seen from anyone else! He was organized garbage crawls/ Bylaw crawls in a effort to clean this city and get people into action on a concrete level. He’s discovered some nasty abandoned buildings that turned out held toxic chemicals. When did anyone else do this?

Also he’s new and I am not talking about him being young, Hamilton’s councillors seem to be in a semi-perminant state of suspended animation where all there opnions and ideas are all from a by gone era. Unacceptable!

Matt is one of the few with a actual background in the arts from being a musician/artist, I think he would add a fresh prespective to the lawyers/business people on council.

Hamilton deserves politicans who don’t just look at easy answers or think of quick solutions. Matt Jelly is passionate about civic issues and not just for artists or business people but for all people in this city.

I urge you to vote and vote for Matt!

UPDATE! YOU MAY WANT TO GOTO MATT JELLY’S BLOG ASAP!

I kinda disagree with the Spec’s claim of Matt Jelly being a nuisance, hell give me two more and maybe the city would be ok by now!

Today · 10:00am – 2:00pm
Location    Caroline and Stuart Street, Behind the former Rheem Factory.
THIS SATURDAY – WEST HARBOUR GARBAGE CRAWL. Meet at 10 am behind the Rheem Factory at Caroline North and Stuart Street. Bring bags and gloves and friends and family. We’ll be picking up litter from the naturalized areas around the train tracks.

Feel free to use the event photo as your profile photo to help spread the word. Let the cleanup begin.

Sorry to keep doing this to you but……

Rally for West Harbour this Sunday in Hess!!!! Link Here…..

One thing everyone can agree upon from Dofasco is that wherever the stadium is built use local materials! (Also who knew Dofasco has twitter?)

On a lighter note did you know Matt Jelly is also a designer?

Also you may want to stop by 170 King in Hamilton my friend Bryce Huffman has a art show there! 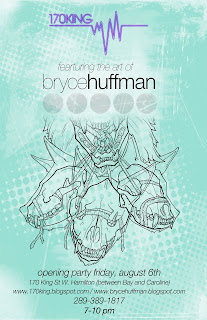 This is a quick notice to let you know about a community cleanup event happening tomorrow morning in the Balsam neighbourhood, hosted by Parkview Secondary School. The cleanup happens tomorrow (Friday May 21st) at 10:30 am til 11:30 am, followed by a BBQ from 11:30 til 12:30. All are welcome to join the group and help beautify the neighbourhood. Hats off to Walter Bogul and the students of Parkview for taking this on- it’s always great to see citizens taking part to make the City a better place to live, work and play, and great to see educators inspiring young people to care about their neighbourhood. If you have some free time, please come down and lend a hand!

Also- on a completely unrelated note, I’ll be playing a show tomorrow night at This Ain’t Hollywood (345 James St. North) with Lee Reed and Nilla. It’s my unofficial birthday party, and I’m anticipating a great night of music. The show starts around 9 pm, and cover is 8 dollars, or 6 dollars with a canned good.

Congrats to Matt Jelly for a awesome Garbage Crawl, he even got a mention in the local paper!

Another big note was the interview with Jane and Holly of White Elephant in Toronto Craft Alert!! Go check out the article!

Also another thing of note was a article in the spectator about a Steam Punk Couple! Its pretty awesome and although I’m not into it at all I would love to see tons of Hamilton folks into this cause somehow I think it fits!